How to write an essay, 11 класс 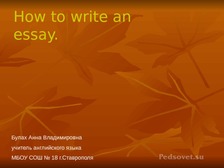 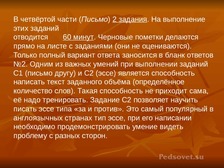 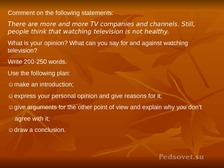 Comment on the following statements: There are more and more TV companies and channels. Still, people think that watching television is not healthy. What is your opinion? What can you say for and against watching television? Write 200-250 words. Use the following plan: ☺make an introduction; ☺express your personal opinion and give reasons for it; ☺give arguments for the other point of view and explain why you don’t agree with it; ☺draw a conclusion. 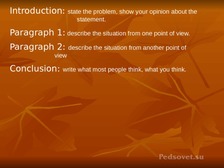 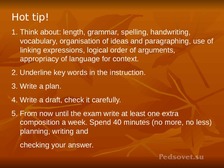 Hot tip! 1. Think about: length, grammar, spelling, handwriting, vocabulary, organisation of ideas and paragraphing, use of linking expressions, logical order of arguments, appropriacy of language for context. 2. Underline key words in the instruction. 3. Write a plan. 4. Write a draft, check it carefully. 5. From now until the exam write at least one extra composition a week. Spend 40 minutes (no more, no less) planning, writing and checking your answer. 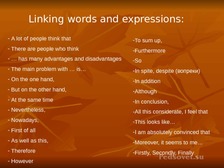 Linking words and expressions: - A lot of people think that -To sum up, - There are people who think -Furthermore - … has many advantages and disadvantages -So - The main problem with … is… -In spite, despite (вопреки) - On the one hand, -In addition - But on the other hand, -Although - At the same time -In conclusion, - Nevertheless, -All this considerate, I feel that - Nowadays, -This looks like… - First of all -I am absolutely convinced that - As well as this, -Moreover, it seems to me… - Therefore -Firstly, Secondly, Finally - However 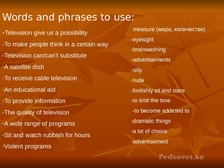 Words and phrases to use: -Television give us a possibility -To make people think in a certain way -Television can/can’t substitute -measure (мера, количество) -eyesight -brainwashing -advertisements -A satellite dish -silly -To receive cable television -rude -An educational aid -foolishly sit and stare -To provide information -to limit the time -The quality of television -to become addicted to -A wide range of programs -dramatic things -Sit and watch rubbish for hours -Violent programs -a lot of choice -advertisement 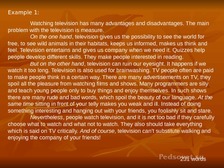 Example 1: Watching television has many advantages and disadvantages. The main problem with the television is measure. On the one hand, television gives us the possibility to see the world for free, to see wild animals in their habitats, keeps us informed, makes us think and feel. Television entertains and gives us company when we need it. Quizzes help people develop different skills. They make people interested in reading. But on the other hand, television can ruin our eyesight. It happens if we watch it too long. Television is also used for brainwashing. TV people often are paid to make people think in a certain way. There are many advertisements on TV, they spoil all the pleasure from watching films and shows. Many programmers are silly and teach young people only to buy things and enjoy themselves. In such shows there are many rude and bad words, which spoil the beauty of our language. At the same time sitting in front of your telly makes you weak and ill. Instead of doing something interesting and hanging out with your friends, you foolishly sit and stare. Nevertheless, people watch television, and it is not too bad if they carefully choose what to watch and what not to watch. They also should take everything which is said on TV critically. And of course, television can’t substitute walking and enjoying the company of your friends! 231 words

Example 2: First of all I think it is important to say that the quality of television has improved a great deal in recent years. There is now a wide range of programmes suitable for all ages and interests. In my opinion, there are many things that children can learn from television. They can, for example, learn about other countries, other ways of living and so on. As well as this, television can give parents a chance to be free of their children for a short time, which can be very important! On the other hand, sometimes children will just sit and watch rubbish for hours at a time and obviously this is not a good thing and needs to be controlled. Therefore, I think parents should discuss and agree just how much TV the children watch. I do think, however, that it is important that children are involved in the decision and not just told, otherwise they will want to watch TV even more because it is something they are not allowed to do. To sum up then, parents need to think about how their children use TV and be prepared to limit the time when it is on if they feel their children are becoming addicted to it in an unhealthy kind of way. 214 words 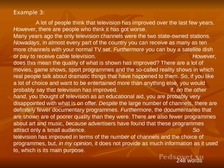 Example 3: A lot of people think that television has improved over the last few years. However, there are people who think it has got worse. Many years ago the only television channels were the two state-owned stations. Nowadays, in almost every part of the country you can receive as many as ten more channels with your normal TV set. Furthermore you can buy a satellite dish or pay to receive cable television. However, does this mean the quality of what is shown has improved? There are a lot of movies, game shows, sport programmes and the so-called reality shows in which real people talk about dramatic things that have happened to them. So, if you like a lot of choice and want to be entertained more than anything else, you would probably say that television has improved. If, on the other hand, you thought of television as an educational aid, you are probably very disappointed with what is on offer. Despite the large number of channels, there are definitely fewer documentary programmes. Furthermore, the documentaries that are shown are of poorer quality than they were. There are also fewer programmes about art and music, because advertisers have found that these programmes attract only a small audience. So television has improved in terms of the number of channels and the choice of programmes, but, in my opinion, it does not provide as much information as it used to, which is its main purpose. 248 words 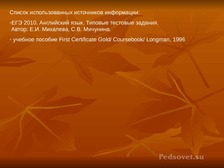