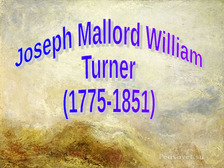 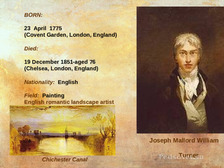 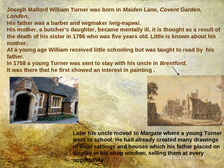 Joseph Mallord William Turner was born in Maiden Lane, Covent Garden, London. His father was a barber and wigmaker /wig-парик/. His mother, a butcher’s daughter, became mentally ill, it is thought as a result of the death of his sister in 1786 who was five years old. Little is known about his mother. At a young age William received little schooling but was taught to read by his father. In 1758 a young Turner was sent to stay with his uncle in Brentford. It was there that he first showed an interest in painting . Later his uncle moved to Margate where a young Turner went to school. He had already created many drawings of local settings and houses which his father placed on display in his shop window, selling them at every opportunity. 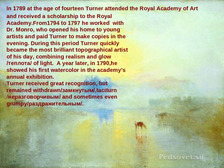 In 1789 at the age of fourteen Turner attended the Royal Academy of Art and received a scholarship to the Royal Academy.From1794 to 1797 he worked with Dr. Monro, who opened his home to young artists and paid Turner to make copies in the evening. During this period Turner quickly became the most brilliant topographical artist of his day, combining realism and glow /теплота/ of light. A year later, in 1790,he showed his first watercolor in the academy’s annual exhibition. Turner received great recognition, but remained withdrawn/замкнутым/,taciturn /неразговорчивым/ and sometimes even grumpy/раздражительным/. 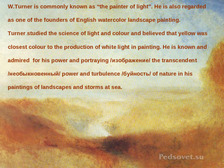 W.Turner is commonly known as “the painter of light”. He is also regarded as one of the founders of English watercolor landscape painting. Turner studied the science of light and colour and believed that yellow was closest colour to the production of white light in painting. He is known and admired for his power and portraying /изображение/ the transcendent /необыкновенный/ power and turbulence /буйность/ of nature in his paintings of landscapes and storms at sea. 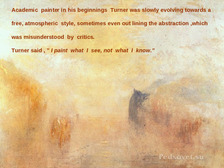 Academic painter in his beginnings Turner was slowly evolving towards a free, atmospheric style, sometimes even out lining the abstraction ,which was misunderstood by critics. Turner said , ” I paint what I see, not what I know.” 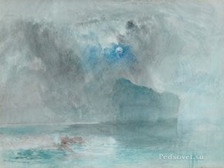 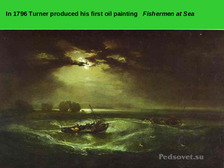 In 1796 Turner produced his first oil painting Fishermen at Sea 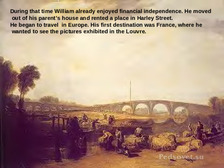 During that time William already enjoyed financial independence. He moved out of his parent’s house and rented a place in Harley Street. He began to travel in Europe. His first destination was France, where he wanted to see the pictures exhibited in the Louvre. 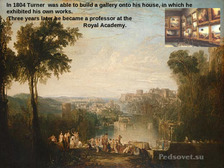 In 1804 Turner was able to build a gallery onto his house, in which he exhibited his own works. Three years later he became a professor at the Royal Academy. 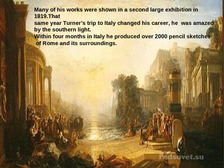 Many of his works were shown in a second large exhibition in 1819.That same year Turner’s trip to Italy changed his career, he was amazed by the southern light. Within four months in Italy he produced over 2000 pencil sketches of Rome and its surroundings. 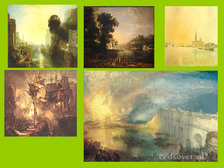 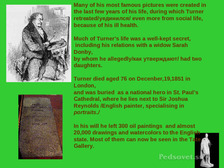 Many of his most famous pictures were created in the last few years of his life, during which Turner retreated/уединился/ even more from social life, because of his ill health. Much of Turner’s life was a well-kept secret, including his relations with a widow Sarah Donby, by whom he allegedly/как утверждают/ had two daughters. Turner died aged 76 on Decenber,19,1851 in London, and was buried as a national hero in St. Paul’s Cathedral, where he lies next to Sir Joshua Reynolds /English painter, specialising in portraits./ In his will he left 300 oil paintings and almost 20,000 drawings and watercolors to the English state. Most of them can now be seen in the Tate Gallery.