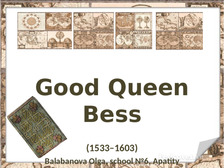 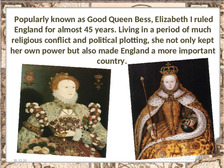 Popularly known as Good Queen Bess, Elizabeth I ruled England for almost 45 years. Living in a period of much religious conflict and political plotting, she not only kept her own power but also made England a more important country.   26.03.18 2 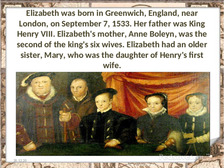 Elizabeth was born in Greenwich, England, near London, on September 7, 1533. Her father was King Henry VIII. Elizabeth's mother, Anne Boleyn, was the second of the king's six wives. Elizabeth had an older sister, Mary, who was the daughter of Henry's first wife. 26.03.18 3 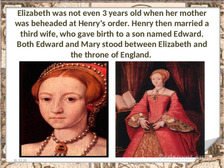 Elizabeth was not even 3 years old when her mother was beheaded at Henry's order. Henry then married a third wife, who gave birth to a son named Edward. Both Edward and Mary stood between Elizabeth and the throne of England. 26.03.18 4 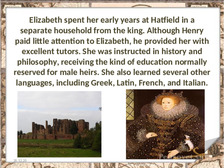 Elizabeth spent her early years at Hatfield in a separate household from the king. Although Henry paid little attention to Elizabeth, he provided her with excellent tutors. She was instructed in history and philosophy, receiving the kind of education normally reserved for male heirs. She also learned several other languages, including Greek, Latin, French, and Italian. 26.03.18 5 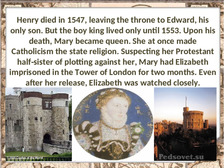 Henry died in 1547, leaving the throne to Edward, his only son. But the boy king lived only until 1553. Upon his death, Mary became queen. She at once made Catholicism the state religion. Suspecting her Protestant half-sister of plotting against her, Mary had Elizabeth imprisoned in the Tower of London for two months. Even after her release, Elizabeth was watched closely. 26.03.18 6 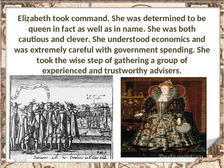 Elizabeth took command. She was determined to be queen in fact as well as in name. She was both cautious and clever. She understood economics and was extremely careful with government spending. She took the wise step of gathering a group of experienced and trustworthy advisers.   26.03.18 7 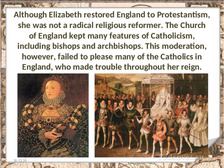 Although Elizabeth restored England to Protestantism, she was not a radical religious reformer. The Church of England kept many features of Catholicism, including bishops and archbishops. This moderation, however, failed to please many of the Catholics in England, who made trouble throughout her reign. 26.03.18 8 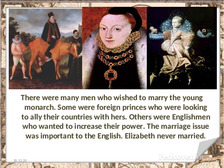 There were many men who wished to marry the young monarch. Some were foreign princes who were looking to ally their countries with hers. Others were Englishmen who wanted to increase their power. The marriage issue was important to the English. Elizabeth never married. 26.03.18 9 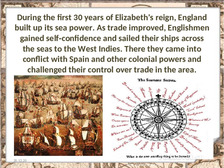 During the first 30 years of Elizabeth's reign, England built up its sea power. As trade improved, Englishmen gained self-confidence and sailed their ships across the seas to the West Indies. There they came into conflict with Spain and other colonial powers and challenged their control over trade in the area. 26.03.18 10 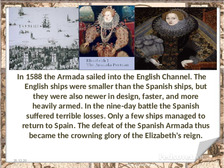 In 1588 the Armada sailed into the English Channel. The English ships were smaller than the Spanish ships, but they were also newer in design, faster, and more heavily armed. In the nine-day battle the Spanish suffered terrible losses. Only a few ships managed to return to Spain. The defeat of the Spanish Armada thus became the crowning glory of the Elizabeth's reign. 26.03.18 11 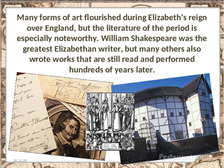 Many forms of art flourished during Elizabeth's reign over England, but the literature of the period is especially noteworthy. William Shakespeare was the greatest Elizabethan writer, but many others also wrote works that are still read and performed hundreds of years later.   26.03.18 12 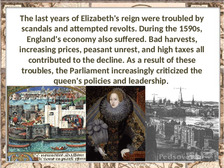 The last years of Elizabeth's reign were troubled by scandals and attempted revolts. During the 1590s, England's economy also suffered. Bad harvests, increasing prices, peasant unrest, and high taxes all contributed to the decline. As a result of these troubles, the Parliament increasingly criticized the queen's policies and leadership. 26.03.18 13 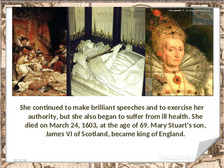 She continued to make brilliant speeches and to exercise her authority, but she also began to suffer from ill health. She died on March 24, 1603, at the age of 69. Mary Stuart's son, James VI of Scotland, became king of England.   26.03.18 14 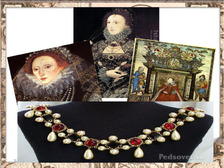 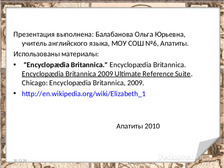