Викторина "People we are proud of" 7 класс 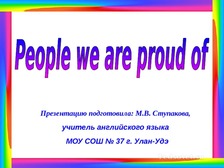 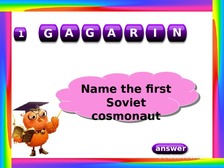 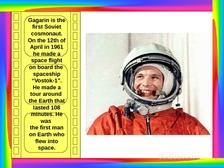 Gagarin is the first Soviet cosmonaut. On the 12th of April in 1961 he made a space flight on board the spaceship “Vostok-1”. He made a tour around the Earth that lasted 108 minutes. He was the first man on Earth who flew into space. 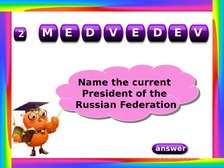 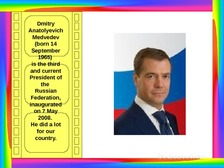 Dmitry Anatolyevich Medvedev (born 14 September 1965) is the third and current President of the Russian Federation, inaugurated on 7 May 2008. He did a lot for our country. 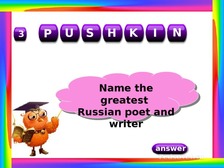 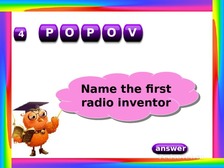 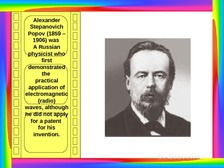 Alexander Stepanovich Popov (1859 – 1906) was A Russian physicist who first demonstrated the practical application of electromagnetic (radio) waves, although he did not apply for a patent for his invention. 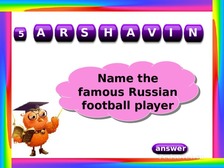 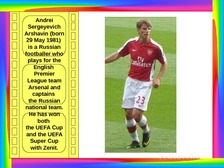 Andrei Sergeyevich Arshavin (born 29 May 1981) is a Russian footballer who plays for the English Premier League team Arsenal and captains the Russian national team. He has won both the UEFA Cup and the UEFA Super Cup with Zenit. 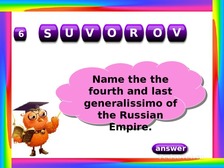 6 S U V O R O V Name the the fourth and last generalissimo of the Russian Empire. answer 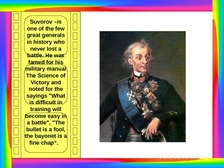 Suvorov –is one of the few great generals in history who never lost a battle. He was famed for his military manual The Science of Victory and noted for the sayings "What is difficult in training will become easy in a battle", "The bullet is a fool, the bayonet is a fine chap“. 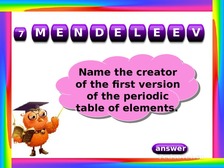 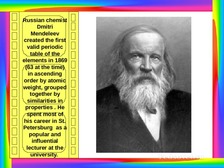 Russian chemist Dmitri Mendeleev created the first valid periodic table of the elements in 1869 (63 at the time) in ascending order by atomic weight, grouped together by similarities in properties . He spent most of his career in St. Petersburg as a popular and influential lecturer at the university. 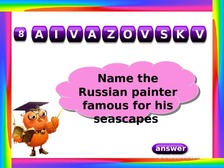 Ivan Konstantinovich Aivazovsky originally Aivazian was especially interested in marine landscapes. In 1836 Aivazovsky presented 5 marine pictures to the Academic exhibition, which were highly appreciated. He worked much and had many exhibitions, meeting everywhere with success 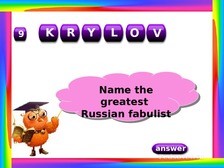 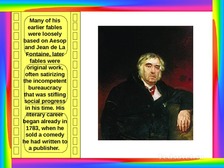 Many of his earlier fables were loosely based on Aesop and Jean de La Fontaine, later fables were original work, often satirizing the incompetent bureaucracy that was stifling social progress in his time. His literary career began already in 1783, when he sold a comedy he had written to a publisher. 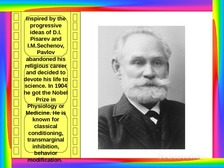 Inspired by the progressive ideas of D.I. Pisarev and I.M.Sechenov, Pavlov abandoned his religious career and decided to devote his life to science. In 1904 he got the Nobel Prize in Physiology or Medicine. He is known for classical conditioning, transmarginal inhibition, behavior modification. 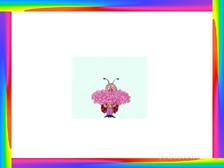 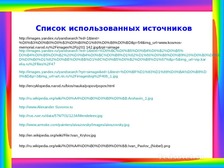