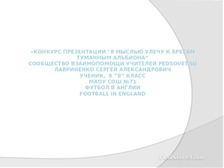 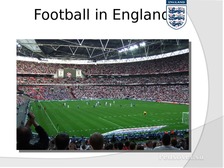 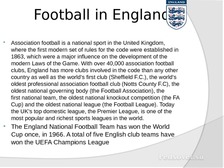 Football in England  Association football is a national sport in the United Kingdom, where the first modern set of rules for the code were established in 1863, which were a major influence on the development of the modern Laws of the Game. With over 40,000 association football clubs, England has more clubs involved in the code than any other country as well as the world's first club (Sheffield F.C.), the world's oldest professional association football club (Notts County F.C), the oldest national governing body (the Football Association), the first national team, the oldest national knockout competition (the FA Cup) and the oldest national league (the Football League). Today the UK's top domestic league, the Premier League, is one of the most popular and richest sports leagues in the world.  The England National Football Team has won the World Cup once, in 1966. A total of five English club teams have won the UEFA Champions League 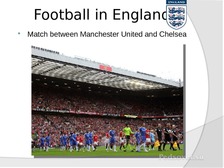 Football in England  Match between Manchester United and Chelsea 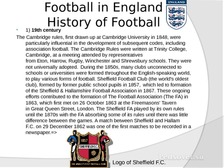 Football in England History of Football 1) 19th century The Cambridge rules, first drawn up at Cambridge University in 1848, were particularly influential in the development of subsequent codes, including association football. The Cambridge Rules were written at Trinity College, Cambridge, at a meeting attended by representatives from Eton, Harrow, Rugby, Winchester and Shrewsbury schools. They were not universally adopted. During the 1850s, many clubs unconnected to schools or universities were formed throughout the English-speaking world, to play various forms of football. Sheffield Football Club (the world's oldest club), formed by former public school pupils in 1857, which led to formation of the Sheffield & Hallamshire Football Association in 1867. These ongoing efforts contributed to the formation of The Football Association (The FA) in 1863, which first met on 26 October 1863 at the Freemasons' Tavern in Great Queen Street, London. The Sheffield FA played by its own rules until the 1870s with the FA absorbing some of its rules until there was little difference between the games. A match between Sheffield and Hallam F.C. on 29 December 1862 was one of the first matches to be recorded in a newspaper.=>  Logo of Sheffield F.C. 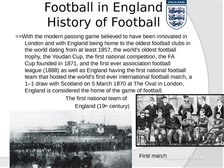 Football in England History of Football =>With the modern passing game believed to have been innovated in London and with England being home to the oldest football clubs in the world dating from at least 1857, the world's oldest football trophy, the Youdan Cup, the first national competition, the FA Cup founded in 1871, and the first ever association football league (1888) as well as England having the first national football team that hosted the world's first ever international football match, a 1–1 draw with Scotland on 5 March 1870 at The Oval in London, England is considered the home of the game of football. The first national team of England (19th century) First match 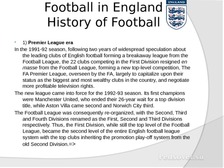 Football in England History of Football  1) Premier League era In the 1991-92 season, following two years of widespread speculation about the leading clubs of English football forming a breakaway league from the Football League, the 22 clubs competing in the First Division resigned en masse from the Football League, forming a new top-level competition, The FA Premier League, overseen by the FA, largely to capitalize upon their status as the biggest and most wealthy clubs in the country, and negotiate more profitable television rights. The new league came into force for the 1992-93 season. Its first champions were Manchester United, who ended their 26-year wait for a top division title, while Aston Villa came second and Norwich City third. The Football League was consequently re-organized, with the Second, Third and Fourth Divisions renamed as the First, Second and Third Divisions respectively. Thus, the First Division, while still the top level of the Football League, became the second level of the entire English football league system with the top clubs inheriting the promotion play-off system from the old Second Division.=> 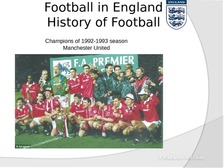 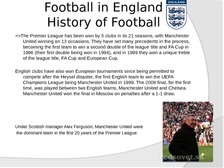 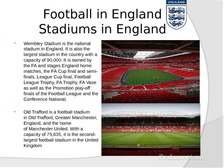 Football in England Stadiums in England  Wembley Stadium is the national stadium in England. It is also the largest stadium in the country with a capacity of 90,000. It is owned by the FA and stages England home matches, the FA Cup final and semifinals, League Cup final, Football League Trophy, FA Trophy, FA Vase as well as the Promotion play-off finals of the Football League and the Conference National.  Old Trafford is a football stadium in Old Trafford, Greater Manchester, England, and the home of Manchester United. With a capacity of 75,635, it is the secondlargest football stadium in the United Kingdom 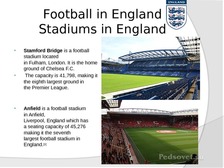 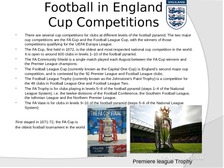 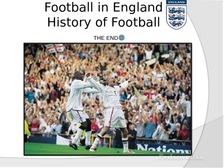 Football in England History of Football THE END 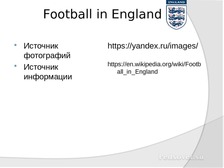