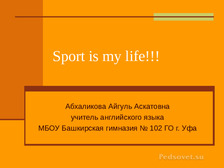 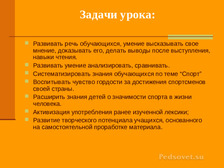 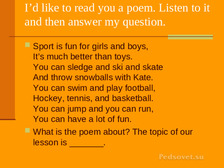 I’d like to read you a poem. Listen to it and then answer my question.  Sport is fun for girls and boys, It’s much better than toys. You can sledge and ski and skate And throw snowballs with Kate. You can swim and play football, Hockey, tennis, and basketball. You can jump and you can run, You can have a lot of fun.  What is the poem about? The topic of our lesson is _______. 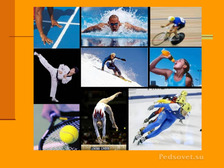 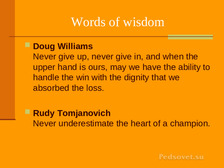 Words of wisdom  Doug Williams Never give up, never give in, and when the upper hand is ours, may we have the ability to handle the win with the dignity that we absorbed the loss.  Rudy Tomjanovich Never underestimate the heart of a champion. 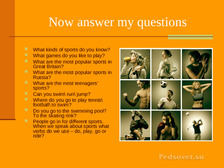 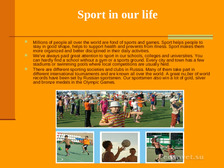 Sport in our life    Millions of people all over the world are fond of sports and games. Sport helps people to stay in good shape, helps to support health and prevents from illness. Sport makes them more organized and better disciplined in their daily activities. We've always paid great attention to sport in our schools, colleges and universities. You can hardly find a school without a gym or a sports ground. Every city and town has a few stadiums or swimming pools where local competitions are usually held. There are different sporting societies and clubs in Russia. Many of them take part in different international tournaments and are known all over the world. A great nu,ber of world records have been set by Russian sportsmen. Our sportsmen also win a lot of gold, silver and bronze medals in the Olympic Games. 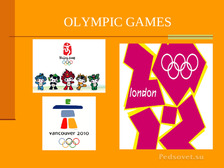 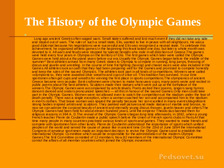 The History of the Olympic Games  Long ago ancient Greeks often waged wars. Small states suffered and lost much even if they did not take any side and stayed out of wars. The ruler of such a small state, Elis, wanted to live in peace with all neighbours. He was a good diplomat because his negotiations were successful and Elis was recognized a neutral state. To celebrate this achievement, he organized athletic games.In the beginning this feast lasted one day, but later a whole month was devoted to it. All wars and feuds were stopped by special heralds who rode in all directions of Greece.The games were held every four years in Olympia on the territory of Elis. The first games which later were called the Olympic Games were held about a thousand years before our era.Usually the Olympic Games began before the middle of the summer^ Best athletes arrived from many Greek states to Olympia to compete in running, long jumps, throwing of discus and javelin and wrestling. In the course of time fist fighting (boxing) and chariot races were also included in the Games.All athletes took an oath that they had been preparing well for the Games and promised to compete honestly and keep the rules of the sacred Olympics. The athletes took part in all kinds of competitions. Winners were called «olympionics», they were awarded olive wreaths and cups of olive oil. This tradition has survived. In our time sportsmen often get cups and wreaths for winning the first place in sports competitions.The olympionics of ancient Greece became very popular. Best craftsmen were chosen to make honourary cups, many poets wrote and recited in public poems about the best athletes. Sculptors made their statues which were put up at the birthplace of the winners.The Olympic Games were accompanied by arts festivals. Poets recited their poems, singers sang hymns dancers danced and orators pronounced speeches — all this in honour of the sacred Games.Only men could take part in the Olympic Games. Women were not allowed even to watch the competitions at the stadium under the fear of death penalty. There was a single exception, when a woman coached her son and accompanied him to the stadium in men's clothes. That brave woman was spared the penalty because her son excelled in many events.Magnificent strong bodies inspired artists and sculptors. They painted wall pictures and made statues of marble and bronze, so now we can admire the corporal beauty of ancient and eternally young discus thrower, javelin bearer and others.The Olympic Games had been held for about eleven hundred years, until the emperor Theodosius banned them for religious reasons in 394 A. D.The revival of the Olympic Games began long time afterwards, in 1892, when a young French teacher Pierre de Coubertin made a public speech before the Union of French sports clubs in Paris.At that time many people in many countries practised various kinds of sports and games. They wanted to make friends and compete with sportsmen from other lands. Pierre de Coubertin understood the importance of sports which unified peoples of the world and served the cause of peace like in ancient time.On the 23rd of June 1894 the International Congress of amateur sportsmen made an important decision: to revive the Olympic Games and to establish the International Olympic Committee which would be responsible for the administration of the modern-Olympic Games.The first Committee consisted of 12 members. Now 82 members of the International Olympic Committee control the affairs of all member countries which joined the Olympic movement. 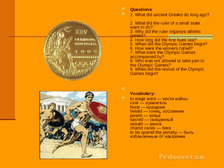 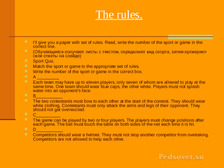 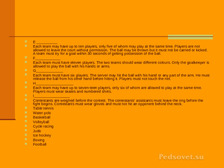 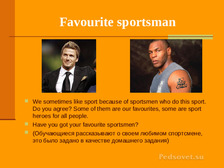 Favourite sportsman  We sometimes like sport because of sportsmen who do this sport. Do you agree? Some of them are our favourites, some are sport heroes for all people.  Have you got your favourite sportsmen?  (Обучающиеся рассказывают о своем любимом спортсмене, это было задано в качестве домашнего задания) 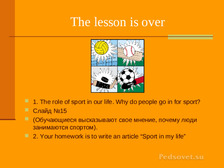 The lesson is over  1. The role of sport in our life. Why do people go in for sport?  Слайд №15  (Обучающиеся высказывают свое мнение, почему люди занимаются спортом).  2. Your homework is to write an article “Sport in my life” 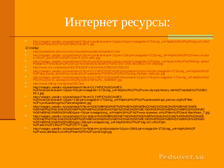