« The political systems of English-speaking countries »

According to phonetic exercises students title the topic of the lesson, set a goal and frame a plan of it. (слайд1 )

Add one word to make a word combination. (слайд 2 )

Open the brackets, using Passive Voice and write the name of the country. (слайд 3 )

The Prime-Minister ( appoint) by the Queen

The members of the House of Commons ( elect) by the people

The President (elect) directly by the people

The reputation of the Monarchy (spoil) by the royals

The Administration (approve) by the Congress

Judges (appoint ) by the President

Political System of the USA

Washington, the capital of the United States, is situated on the Potomac River in the District of Columbia. The district is a piece of land which doesn't belong to any state but to all the states. Under the Constitution, the federal government is divided into three branches. The legislative power is vested in Congress and made up of two houses: the Senate and the House of Representatives. There are 435 members in the House of Representatives and 100 senators. Each state elects two members of the 100-member Senate.

The executive branch is headed by the President, who proposes bills to Congress, enforces federal laws, serves as commander-in-chief of the Armed Forces and with the approval of the Senate, makes treaties. President can veto a bill unless Congress by a two-thirds vote shall overrule him.

The vice President, elected from the same political party as the President, acts as chairman of the Senate, and in the event of the death of the President assumes the Presidency. The judicial branch is made up of Federal District Courts, 11 Federal Courts and the Supreme Court. Federal judges are appointed by the President for life. Federal courts decide cases involving federal law, conflicts between citizens of different states. The Supreme Court may rule the law to be unconstitutional.

Now about the elections. The President is chosen in nation-wide elections every 4 years together with the Vice-President. Constitution has been amended 26 times. The Bill of Rights guarantees individual liberties: freedom of speech, religion and so on. Later amendments abolished slavery, granted the right to vote to women and allowed citizens to vote at age 18.

The United Kingdom of Great Britain and Northern Ireland is a constitutional monarchy. It means that the sovereign reigns but does not rule. Britain does not have a written constitution, but a set of laws.

The House of Commons consists of Members of Parliament. There are 650 of them in the House of Commons. They are elected by secret ballot. General elections are held every five years. The country is divided into 650 constituencies. All citizens, aged 18 have the right to vote.

Each political party puts up one candidate for each constituency. The one who wins the most votes is elected MP for that area.

The party which wins the most seats in Parliament forms the Government. Its leader becomes the Prime Minister. His first job is to choose his Cabinet. The Prime Minister usually takes policy decisions with the agreement of the Cabinet. The functions of the House of Commons are legislation and scrutiny of government activities. The House of Commons is presided over by the Speaker. The Speaker is appointed by the Government.

But after two rejections they are obliged to accept it. And finally a bill goes to the monarch to be signed. Only then it becomes law.

(Students listen to music, after listening they complete the sentence: This music makes me think of…) (слайд 5 )

Who is the Head of state in Britain?

How many ministers are there in the Cabinet?

How many houses does Parliament consist of? What are they?

Who is in the House of Commons?

Who forms the House of Lords?

Which institutions represent the legislative and executive brunches?

What are the functions of Congress?

Who elects the President?

What is the main document of the USA?

How many members are there in the House of Representatives?

Who is the head of the executive power in the USA?

How often do the President's elections take place?

What does the British Parliament consist of?

2. How many main political parties are there in Great Britain?

3. The British national flag is called:

b) cross and stripes

4. What is the official residence of the British Prime Minister?

a) a constitutional monarchy

Students make up projects and present them. (слайд 6 )

The conclusion of the lesson: Relaxation. Marks. Homework. 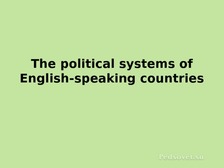 The political systems of English-speaking countries 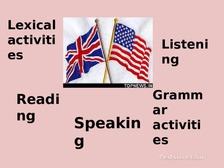