Look at this poster and answer the questions.

What association have you got when you see this poster?

When did the Great Patriotic War begin?

What association have got when you see this poster?

Can you name the date of the Battle of Moscow?

You are going to read the text “Victor Talalikhin” who was one of the heroes of the Battle of Moscow.

Before reading answer the questions.

Do you like to read any texts about the Great Patriotic War?

Have you ever read about the heroes of the Battle of Moscow?

What was Victor Talalikhin during the Great Patriotic War?

Viktor was one of the most popular men in his squadron. He was the youngest among the pilots of his unit, short but strong and quick. Everyone liked him and called him “ Kid” . Suddenly the alarm was given. In a minute Victor Talalikhin was in the plane ready to carry out his combat mission. The next minute he was in the air. Victor’s orders were to destroy enemy bombers flying to Moscow.

Talalikhin noticed a fascist plane at a great distance. It was a very big bomber and it flew heavily through the air. The distance between the two planes became shorter and shorter with every minute. Now Talalikhin saw the black swastika on the fascist bomber clearly. Realizing the danger, the fascist pilot tried to hide in the clouds. “No, you won’t get away. And you will not get to Moscow this time!” Talalikhin shouted and opened fire.

Talalikhin attacked the German bomber six times. And every time the pilot of the bomber skillfully changed the position of his plane. It was clear that he was very experienced. Talalikhin attacked the bomber for the seventh time. The distance between the planes was not more than ten meters. He pressed the trigger, but no fire followed – the plane had no ammunition. Victor was thinking of what to do. Suddenly the bomber opened the fire again and Victor was wounded in the right arm.

“I shall ram him!” Talalikhin said to himself. And he directed his plane straight into the enemy bomber. There was a terrible crash, and the fascist bomber fell to the ground. Talalikhin’s plane was also damaged and Victor had to leave it and jump with a parachute.

Talalikhin looked around to see where he was. He felt a sharp pain in his wounded arm. “I’m alive!” It turned out later that he had destroyed a very skilful and experienced fascist pilot. The fascist pirate had many decorations which he had received for bombing Poland, Paris and Norway.Victor saw men and women running towards him. “Why, he is still a boy,” one of women said.

At that moment Victor’s combat friends arrived. They had watched the air battle from the ground and were looking for him. “The kid is here! Talalikhin has come back! Victor is alive!” Victor heard their voices and saw his friends.

V ictor didn’t see any signs on the bomber.

H e was the oldest among the pilots.

V ictor was wounded in the right arm.


He had to leave his plane.


The fascist pilot was un experienced.

O ne of the women said, that he was still a boy.

E veryone liked him and called him “Kid”.

The fascist had many decorations, which he had received for bombing

During the Great Patriotic War Victor was

at a great distance;

of what to do;

of his native place;

What were Victor’s orders?

How many times did he attack the bomber?

He directed his plane straight to the bomber, didn’t he?

Can we call Victor Talalikhin a hero?

Many other people had the attitude to the battle of Moscow. For example:

1. Read the text about them.

A group of 28 men was commanded by general Panfilov were holding a key sector near the Volokolamsk.

Vasiliy Clochkov, an officer, said to his few soldiers, when the fascists sent more tanks against them, “Russia is large, but we cannot retreat, behind us is Moscow”.

Thousands of Soviet people fought behind the front line. Among them was the heroic Komsomol member Zoya Kosmodem’yanskaya.

Thanks to the bravery of the army and partisans the fascists were stopped on the outskirts of Moscow. In early December, 1941, general Zhukov’s troops attacked the fascists and beat them back.

2. Match the names in the first column with the sentences in the second.

3. Look through the list below choose 4 or 5 qualities of a hero and answer the question. Can we call the defenders of Moscow the heroes and why?

someone who sets goals

someone who never gives up

someone who tries hard to be a better person

someone who is helpful

someone who understands a problem and tries to solve it

someone who works hard to achieve a goal

someone who does something extraordinary

someone who does good deeds every day

someone who thinks of others

someone who is famous

Find information and write a short story about some other people who took part in the Great Patriotic War. Get ready to tell about them. 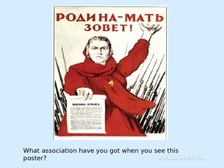 What association have you got when you see this poster? 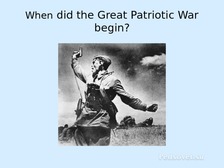 When did the Great Patriotic War begin? 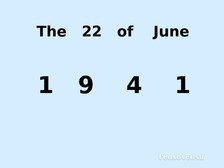 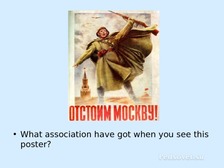 • What association have got when you see this poster? 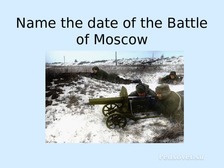 Name the date of the Battle of Moscow 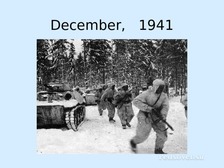 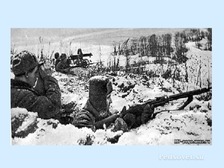