Once upon a time there was a gentleman who married for the second time. He had a daughter from his first wife who had died long ago. And his second wife also had two daughters.

When the ceremonies of the wedding were over, the mother-in-law (мачеха) began to show her real character. She was a bad woman. She made her daughter-in-law (падчерица) to do everything about the house: to make the beds, to wash the dishes, to clean the rooms, to sweep the floor, to water the flowers, etc. While he own daughters just lay on the sofas and did nothing.

One day the King's son gave a ball and invited all the rich people of the kingdom. The stepmother (мачеха) brought her daughters to the ball, because she wanted one of them to become the prince’s wife. And she also said to her stepdaughter that she had a lot to do, so she couldn’t go with them.

When everybody went to the ball, the poor girl started crying. Her godmother (крестная), decided to help her. She was a fairy and with one move of her magic stick she put a beautiful dress and glass shoes on the girl, made a carriage (карета) from the pumpkin with a driver who was a mouse before the spell. The girl was very happy to go to the ball. There was only one condition (условие) to come back before 12 o’clock.

When the girl came to the ball, the Prince fell in love with her. They danced and danced. The girl didn’t notice that the clock began to strike 12 o’clock. Suddenly she ran away. But she left one of the glass shoes.

The prince took it and started to search for the girl. He asked every woman of the kingdom to try on (примерить) the shoe. And finally he found the girl and married her. And they lived together happily ever after.

Once upon a time there was a king who married for the second time. He had a daughter from his first wife who had died long ago. She had very white skin and beautiful black hair. She was a very nice girl.

But many years later, one day the mirror answered: “No, you are not”. The Queen was surprised and shocked. The mirror said that the most beautiful woman of the kingdom was her stepdaughter (падчерица).

The Queen ordered a woodcutter to take the girl to the wood and kill her. But he couldn’t do that because the girl was very beautiful and kind. He let her go. She met seven gnomes and stayed to live with them.

The Queen got to know that her stepdaughter (падчерица) was still alive and decided to kill her herself. She was a witch. She poisoned an apple and turned into an old lady. When the gnomes were at work she knocked at the door. The girl invited the old lady into her house and gave her some food. The old lady gave the girl an apple as a present and left. The girl ate the apple and fell asleep. The Queen was the most beautiful woman of the kingdom again.

One day a prince came to the kingdom. He found the glass coffin (гроб) where was lying the sleeping girl. He kissed her and she woke up. He made her his princess and brought to his kingdom. When the stepmother got to know that the girl was alive and became the princess, she died because of the jealousy (зависть). And the Prince and the Princess lived together happily ever after.

Once upon a time there lived two children: a boy Kay and a girl Gerda. The children's parents had large wooden boxes there, in which little rose trees were planted, and the children liked them very much. The children also liked listening to the fairy-tales told by their Granny. One of them was about a queen who lived in the north. She was very beautiful but with a very cold heart.

One day Kay and Gerda were walking in the garden and were gathering roses. Suddenly Kay felt that something had hurt his eye and heart. And since then everything had changed. From that moment he couldn’t see the beauty of the roses, trees, and even Gerda now seemed very ugly. Kay had changed, because now he had two pieces of a devil mirror inside him. His manners became bad; he didn’t listen to his Granny or parents. He said unpleasant things to Gerda.

One winter day the children were playing in the street. Suddenly, they saw a carriage which was going very fast past them. The carriage stopped right in front of the children. Kay took his sleigh and tied it to the carriage very quickly. And the carriage immediately set off very fast taking Kay away from the city.

Gerda decided to find her friend and soon she left the city, searching for Kay everywhere. During her trip she had a lot of adventures. She met different people who helped her very much.

Finally she found Kay. He was in a very cold palace where it was always winter. He was very white and cold. He didn’t recognize Gerda. He was sitting on the floor and trying to put the pieces of ice together so that they could form a word “eternity” (вечность).

Gerda started crying and then she remembered the poem which Kay liked very much. She told the poem to Kay and he suddenly woke up from his dreams. He recognized Gerda. They hugged each other and returned home to their Granny and parents. And they lived happily ever after.

Once upon a time…

give a red hat

come to the house

the girl and the Granne

Once upon a time there lived…

a princess was born

invite fairies (феи) for a dinner

forget (забыть) about the oldest fairy

say that the princes wouldn’t die, she would fall asleep

be bitten with a spindle

fall asleep for a hundred years

come to the castle

Once upon a time there lived…

a king and a queen

a prince was born

change into the toy

get the toy as a present for Christmas

want to kill the toy

make the girl the princess

return to his castle 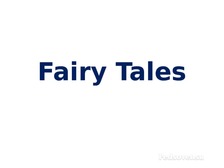 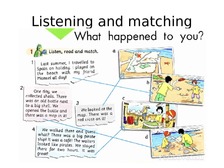 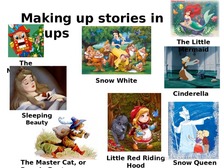 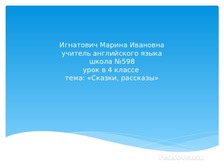 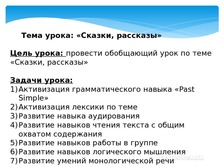 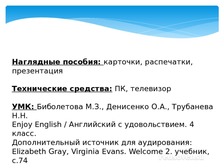 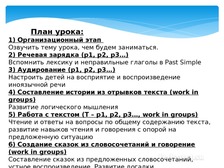 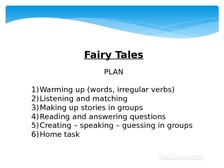 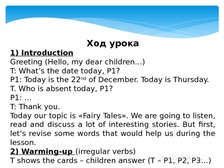 Ход урока 1) Introduction Greeting (Hello, my dear children…) T: What’s the date today, P1? P1: Today is the 22nd of December. Today is Thursday. T. Who is absent today, P1? P1: … T: Thank you. Today our topic is «Fairy Tales». We are going to listen, read and discuss a lot of interesting stories. But first, let’s revise some words that would help us during the lesson. 2) Warming-up (irregular verbs) T shows the cards – children answer (T – P1, P2, P3…) 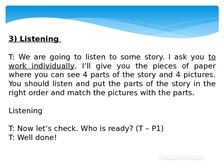 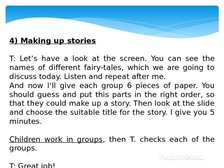 4) Making up stories T: Let’s have a look at the screen. You can see the names of different fairy-tales, which we are going to discuss today. Listen and repeat after me. And now I‘ll give each group 6 pieces of paper. You should guess and put this parts in the right order, so that they could make up a story. Then look at the slide and choose the suitable title for the story. I give you 5 minutes. Children work in groups, then T. checks each of the groups. 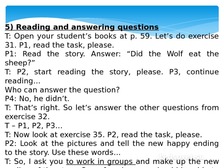 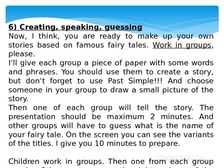 6) Creating, speaking, guessing Now, I think, you are ready to make up your own stories based on famous fairy tales. Work in groups, please. I’ll give each group a piece of paper with some words and phrases. You should use them to create a story, but don’t forget to use Past Simple!!! And choose someone in your group to draw a small picture of the story. Then one of each group will tell the story. The presentation should be maximum 2 minutes. And other groups will have to guess what is the name of your fairy tale. On the screen you can see the variants of the titles. I give you 10 minutes to prepare. Children work in groups. Then one from each group 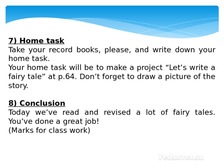 7) Home task Take your record books, please, and write down your home task. Your home task will be to make a project “Let’s write a fairy tale” at p.64. Don’t forget to draw a picture of the story. 8) Conclusion Today we’ve read and revised a lot of fairy tales. You’ve done a great job! (Marks for class work) 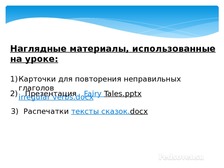 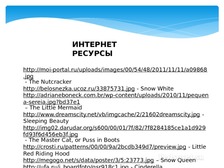