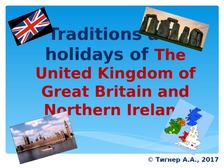 Traditions and holidays of The United Kingdom of Great Britain and Northern Ireland © Тигнер А.А., 2017 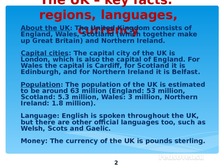 The UK – key facts: regions, languages, About the UK: The United Kingdom consists of England, Wales,currency Scotland (which together make up Great Britain) and Northern Ireland. Capital cities: The capital city of the UK is London, which is also the capital of England. For Wales the capital is Cardiff, for Scotland it is Edinburgh, and for Northern Ireland it is Belfast. Population: The population of the UK is estimated to be around 63 million (England: 53 million, Scotland: 5.3 million, Wales: 3 million, Northern Ireland: 1.8 million). Language: English is spoken throughout the UK, but there are other official languages too, such as Welsh, Scots and Gaelic. Money: The currency of the UK is pounds sterling. 2 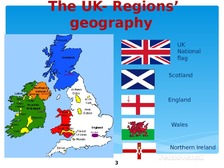 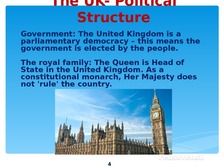 The UK- Political Structure Government: The United Kingdom is a parliamentary democracy – this means the government is elected by the people. The royal family: The Queen is Head of State in the United Kingdom. As a constitutional monarch, Her Majesty does not 'rule' the country. 4 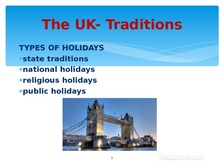 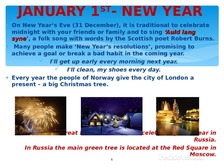 JANUARY 1ST- NEW YEAR  On New Year’s Eve (31 December), it is traditional to celebrate midnight with your friends or family and to sing ‘Auld lang syne’, syne a folk song with words by the Scottish poet Robert Burns.  Many people make ‘New Year’s resolutions’, promising to achieve a goal or break a bad habit in the coming year.  I'll get up early every morning next year.  I'll clean, my shoes every day.  Every year the people of Norway give the city of London a present – a big Christmas tree. Peter the Great has set tradition of celebrating New Year in Russia. In Russia the main green tree is located at the Red Square in Moscow. 6 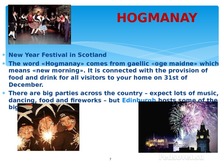 HOGMANAY  New Year Festival in Scotland  The word «Hogmanay» comes from gaellic «oge maidne» which means «new morning». It is connected with the provision of food and drink for all visitors to your home on 31st of December.  There are big parties across the country – expect lots of music, dancing, food and fireworks – but Edinburgh hosts some of the biggest. 7 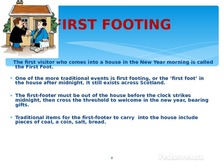 FIRST FOOTING The first visitor who comes into a house in the New Year morning is called the First Foot.  One of the more traditional events is first footing, or the ‘first foot’ in the house after midnight. It still exists across Scotland.  The first-footer must be out of the house before the clock strikes midnight, then cross the threshold to welcome in the new year, bearing gifts.  Traditional items for the first-footer to carry into the house include pieces of coal, a coin, salt, bread. 8 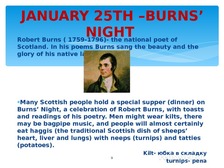 JANUARY 25TH –BURNS’ NIGHT Robert Burns ( 1759-1796)- the national poet of Scotland. In his poems Burns sang the beauty and the glory of his native land. Many Scottish people hold a special supper (dinner) on Burns’ Night, a celebration of Robert Burns, with toasts and readings of his poetry. Men might wear kilts, there may be bagpipe music, and people will almost certainly eat haggis (the traditional Scottish dish of sheeps’ heart, liver and lungs) with neeps (turnips) and tatties (potatoes). 9 Kilt- юбка в складку turnips- репа 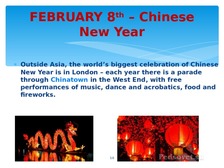 FEBRUARY 8th – Chinese New Year  Outside Asia, the world’s biggest celebration of Chinese New Year is in London – each year there is a parade through Chinatown in the West End, with free performances of music, dance and acrobatics, food and fireworks. 10 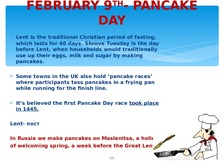 FEBRUARY 9TH- PANCAKE DAY  Lent is the traditional Christian period of fasting, which lasts for 40 days. Shrove Tuesday is the day before Lent, when households would traditionally use up their eggs, milk and sugar by making pancakes.  Some towns in the UK also hold ‘pancake races’ where participants toss pancakes in a frying pan while running for the finish line.  It’s believed the first Pancake Day race took place in 1445. Lent- пост In Russia we make pancakes on Maslenitsa, a holiday of welcoming spring, a week before the Great Lent. 11 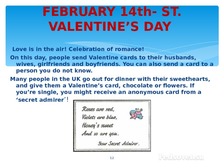 FEBRUARY 14th- ST. VALENTINE’S DAY Love is in the air! Celebration of romance! On this day, people send Valentine cards to their husbands, wives, girlfriends and boyfriends. You can also send a card to a person you do not know. Many people in the UK go out for dinner with their sweethearts, and give them a Valentine’s card, chocolate or flowers. If you’re single, you might receive an anonymous card from a ‘secret admirer’! 12 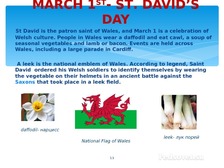 MARCH 1ST- ST. DAVID’S DAY St David is the patron saint of Wales, and March 1 is a celebration of Welsh culture. People in Wales wear a daffodil and eat cawl, a soup of seasonal vegetables and lamb or bacon. Events are held across Wales, including a large parade in Cardiff. А leek is the national emblem of Wales. According to legend, Saint David  ordered his Welsh soldiers to identify themselves by wearing the vegetable on their helmets in an ancient battle against the  Saxons that took place in a leek field. daffodil- нарцисс National Flag of Wales 13 leek- лук порей 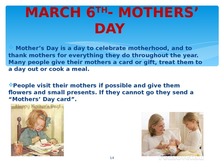 MARCH 6TH- MOTHERS’ DAY  Mother’s Day is a day to celebrate motherhood, and to thank mothers for everything they do throughout the year. Many people give their mothers a card or gift, treat them to a day out or cook a meal. People visit their mothers if possible and give them flowers and small presents. If they cannot go they send a “Mothers’ Day card”. 14 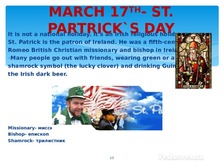 MARCH 17 - ST. PARTRICK`S DAY TH It is not a national holiday. It’s an Irish religious holiday. St. Patrick is the patron of Ireland. He was a fifth-century  Romeo British Christian missionary and bishop in Ireland. Many people go out with friends, wearing green or a shamrock symbol (the lucky clover) and drinking Guinness, the Irish dark beer. Missionary- миссионер Bishop- епископ Shamrock- трилистник 15 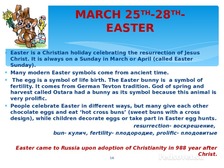 MARCH 25TH-28THEASTER  Easter is a Christian holiday celebrating the resurrection of Jesus Christ. It is always on a Sunday in March or April (called Easter Sunday).  Many modern Easter symbols come from ancient time.  The egg is a symbol of life birth. The Easter bunny is a symbol of fertility. It comes from German Tevton tradition. God of spring and harvest called Ostara had a bunny as its symbol because this animal is very prolific.  People celebrate Easter in different ways, but many give each other chocolate eggs and eat ‘hot cross buns’ (sweet buns with a cross design), while children decorate eggs or take part in Easter egg hunts. resurrection- воскрешение, bun- кулич, fertility- плодородие, prolific- плодовитые Easter came to Russia upon adoption of Christianity in 988 year after Christ. 16 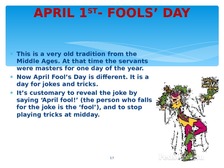 APRIL 1ST- FOOLS’ DAY  This is a very old tradition from the Middle Ages. At that time the servants were masters for one day of the year.  Now April Fool’s Day is different. It is a day for jokes and tricks.  It’s customary to reveal the joke by saying ‘April fool!’ (the person who falls for the joke is the ‘fool’), and to stop playing tricks at midday. 17 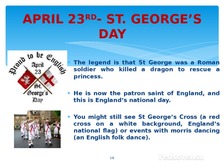 APRIL 23RD- ST. GEORGE’S DAY  The legend is that St George was a Roman soldier who killed a dragon to rescue a princess.  He is now the patron saint of England, and this is England’s national day.  You might still see St George’s Cross (a red cross on a white background, England’s national flag) or events with morris dancing (an English folk dance). 18 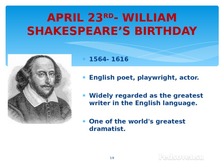 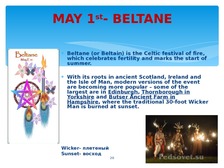 MAY 1st- BELTANE  Beltane (or Beltain) is the Celtic festival of fire, which celebrates fertility and marks the start of summer.  With its roots in ancient Scotland, Ireland and the Isle of Man, modern versions of the event are becoming more popular – some of the largest are in Edinburgh, Thornborough in Yorkshire and Butser Ancient Farm in Hampshire, where the traditional 30-foot Wicker Man is burned at sunset. Wicker- плетеный Sunset- восход 20 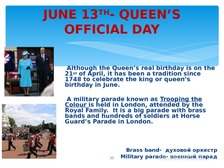 JUNE 13TH- QUEEN’S OFFICIAL DAY Although the Queen’s real birthday is on the 21st of April, it has been a tradition since 1748 to celebrate the king or queen’s birthday in June. A military parade known as Trooping the Colour is held in London, attended by the Royal Family. It is a big parade with brass bands and hundreds of soldiers at Horse Guard’s Parade in London. 21 Brass band- духовой оркестр Military parade- военный парад 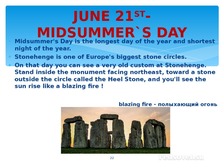 JUNE 21STMIDSUMMER`S DAY  Midsummer's Day is the longest day of the year and shortest night of the year.  Stonehenge is one of Europe's biggest stone circles.  On that day you can see a very old custom at Stonehenge. Stand inside the monument facing northeast, toward a stone outside the circle called the Heel Stone, and you'll see the sun rise like a blazing fire !  blazing fire - полыхающий огонь 22 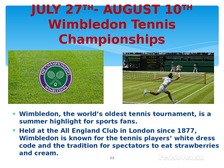 JULY 27 - AUGUST 10 Wimbledon Tennis Championships TH TH  Wimbledon, the world’s oldest tennis tournament, is a summer highlight for sports fans.  Held at the All England Club in London since 1877, Wimbledon is known for the tennis players’ white dress code and the tradition for spectators to eat strawberries and cream. 23 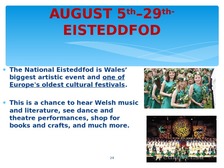 AUGUST 5th–29thEISTEDDFOD  The National Eisteddfod is Wales’ biggest artistic event and one of Europe's oldest cultural festivals.  This is a chance to hear Welsh music and literature, see dance and theatre performances, shop for books and crafts, and much more. 24 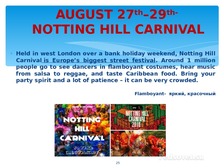 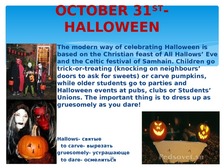 OCTOBER 31 HALLOWEEN ST  The modern way of celebrating Halloween is based on the Christian feast of All Hallows’ Eve and the Celtic festival of Samhain. Children go trick-or-treating (knocking on neighbours’ doors to ask for sweets) or carve pumpkins, while older students go to parties and Halloween events at pubs, clubs or Students’ Unions. The important thing is to dress up as gruesomely as you dare!   Hallows- святые to carve- вырезать  gruesomely- устрашающе 26 to dare- осмелиться 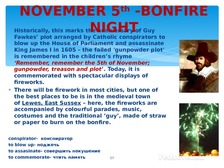 NOVEMBER 5th -BONFIRE NIGHT  Historically, this marks the anniversary of Guy Fawkes’ plot arranged by Catholic conspirators to blow up the House of Parliament and assassinate King James I in 1605 – the failed 'gunpowder plot' is remembered in the children’s rhyme ‘Remember, remember the 5th of November; gunpowder, treason and plot’. Today, it is commemorated with spectacular displays of fireworks.  There will be firework in most cities, but one of the best places to be is in the medieval town of Lewes, East Sussex – here, the fireworks are accompanied by colourful parades, music, costumes and the traditional ‘guy’, made of straw or paper to burn on the bonfire. conspirator- конспиратор to blow up- поджечь to assasinate- совершить покушение to commemorate- чтить память 27 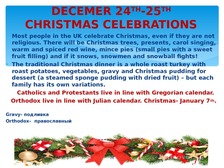 DECEMER 24TH-25TH CHRISTMAS CELEBRATIONS  Most people in the UK celebrate Christmas, even if they are not religious. There will be Christmas trees, presents, carol singing, warm and spiced red wine, mince pies (small pies with a sweet fruit filling) and if it snows, snowmen and snowball fights!  The traditional Christmas dinner is a whole roast turkey with roast potatoes, vegetables, gravy and Christmas pudding for dessert (a steamed sponge pudding with dried fruit) – but each family has its own variations.  Catholics and Protestants live in line with Gregorian calendar. Orthodox live in line with Julian calendar. Christmas- January 7 th. Gravy- подливка Orthodox- православный 28 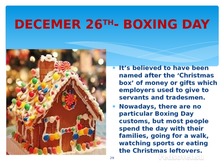 DECEMER 26 - BOXING DAY TH  It’s believed to have been named after the ‘Christmas box’ of money or gifts which employers used to give to servants and tradesmen.  Nowadays, there are no particular Boxing Day customs, but most people spend the day with their families, going for a walk, watching sports or eating the Christmas leftovers. 29 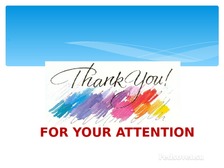  FOR YOUR ATTENTION