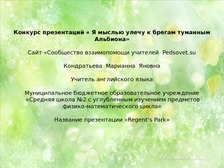 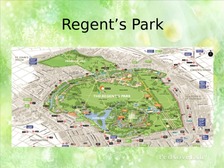 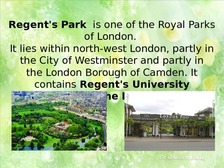 Regent's Park  is one of the Royal Parks of London. It lies within north-west London, partly in the City of Westminster and partly in the London Borough of Camden. It contains Regent's University London and the London Zoo. 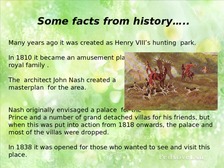 Some facts from history….. Many years ago it was created as Henry VIII’s hunting park. In 1810 it became an amusement place for royal family . The  architect John Nash created a masterplan for the area. Nash originally envisaged a palace for the Prince and a number of grand detached villas for his friends, but when this was put into action from 1818 onwards, the palace and most of the villas were dropped. In 1838 it was opened for those who wanted to see and visit this place. 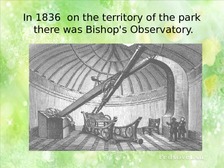 In 1836 on the territory of the park there was Bishop's Observatory. 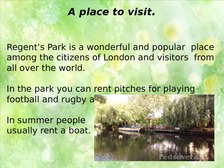 A place to visit. Regent’s Park is a wonderful and popular place among the citizens of London and visitors from all over the world. In the park you can rent pitches for playing football and rugby and tennis courts. In summer people usually rent a boat. 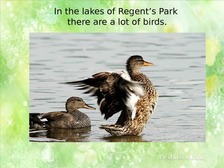 In the lakes of Regent’s Park there are a lot of birds. 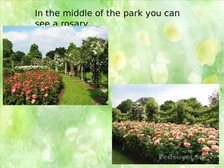 In the middle of the park you can see a rosary. 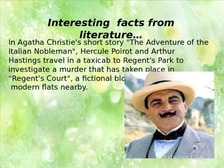 Interesting facts from literature… In Agatha Christie's short story "The Adventure of the Italian Nobleman", Hercule Poirot and Arthur Hastings travel in a taxicab to Regent's Park to investigate a murder that has taken place in "Regent's Court", a fictional block of modern flats nearby. 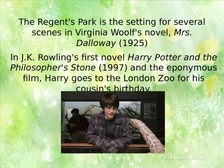 The Regent's Park is the setting for several scenes in Virginia Woolf's novel, Mrs. Dalloway (1925) In J.K. Rowling's first novel Harry Potter and the Philosopher's Stone (1997) and the eponymous film, Harry goes to the London Zoo for his cousin's birthday. 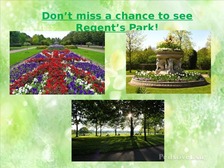 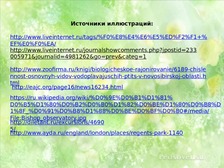 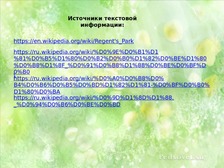