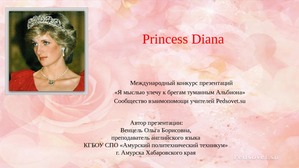 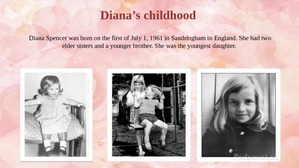 Diana’s childhood Diana Spencer was born on the first of July 1, 1961 in Sandringham in England. She had two elder sisters and a younger brother. She was the youngest daughter. 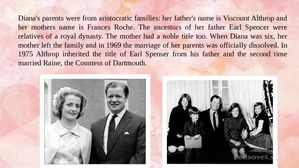 Diana's parents were from aristocratic families: her father's name is Viscount Althrop and her mothers name is Frances Roche. The ancestors of her father Earl Spencer were relatives of a royal dynasty. The mother had a noble title too. When Diana was six, her mother left the family and in 1969 the marriage of her parents was officially dissolved. In 1975 Althrop inherited the title of Earl Spenser from his father and the second time married Raine, the Countess of Dartmouth. 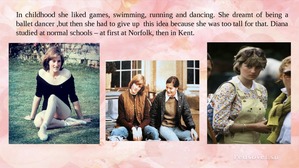 In childhood she liked games, swimming, running and dancing. She dreamt of being a ballet dancer ,but then she had to give up this idea because she was too tall for that. Diana studied at normal schools – at first at Norfolk, then in Kent. 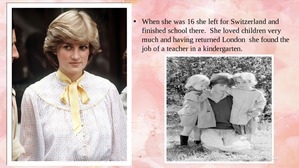 • When she was 16 she left for Switzerland and finished school there. She loved children very much and having returned London she found the job of a teacher in a kindergarten. 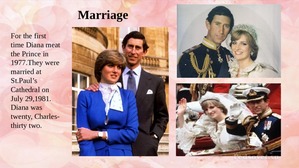 Marriage For the first time Diana meat the Prince in 1977.They were married at St.Paul’s Cathedral on July 29,1981. Diana was twenty, Charlesthirty two. 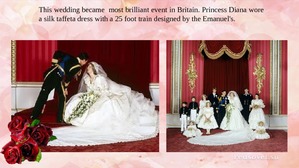 This wedding became most brilliant event in Britain. Princess Diana wore a silk taffeta dress with a 25 foot train designed by the Emanuel's. 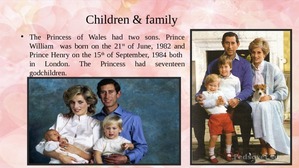 Children & family • The Princess of Wales had two sons. Prince William was born on the 21st of June, 1982 and Prince Henry on the 15th of September, 1984 both in London. The Princess had seventeen godchildren. 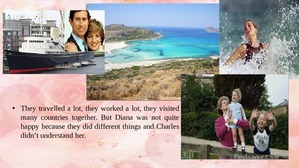 • They travelled a lot, they worked a lot, they visited many countries together. But Diana was not quite happy because they did different things and Charles didn’t understand her. 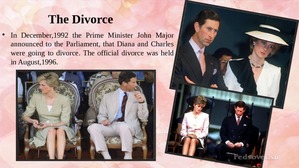 The Divorce • In December,1992 the Prime Minister John Major announced to the Parliament, that Diana and Charles were going to divorce. The official divorce was held in August,1996. 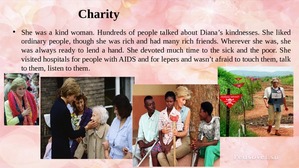 Charity • She was a kind woman. Hundreds of people talked about Diana’s kindnesses. She liked ordinary people, though she was rich and had many rich friends. Wherever she was, she was always ready to lend a hand. She devoted much time to the sick and the poor. She visited hospitals for people with AIDS and for lepers and wasn’t afraid to touch them, talk to them, listen to them. 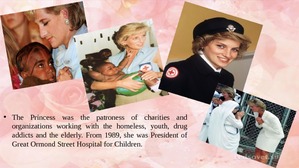 • The Princess was the patroness of charities and organizations working with the homeless, youth, drug addicts and the elderly. From 1989, she was President of Great Ormond Street Hospital for Children. 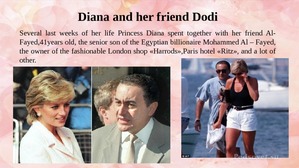 Diana and her friend Dodi Several last weeks of her life Princess Diana spent together with her friend AlFayed,41years old, the senior son of the Egyptian billionaire Mohammed Al – Fayed, the owner of the fashionable London shop «Harrods»,Paris hotel «Ritz», and a lot of other. 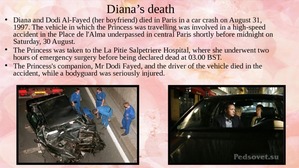 Diana’s death • Diana and Dodi Al-Fayed (her boyfriend) died in Paris in a car crash on August 31, 1997. The vehicle in which the Princess was travelling was involved in a high-speed accident in the Place de l'Alma underpassed in central Paris shortly before midnight on Saturday, 30 August. • The Princess was taken to the La Pitie Salpetriere Hospital, where she underwent two hours of emergency surgery before being declared dead at 03.00 BST. • The Princess's companion, Mr Dodi Fayed, and the driver of the vehicle died in the accident, while a bodyguard was seriously injured. 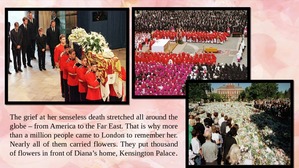 The grief at her senseless death stretched all around the globe – from America to the Far East. That is why more than a million people came to London to remember her. Nearly all of them carried flowers. They put thousand of flowers in front of Diana’s home, Kensington Palace. 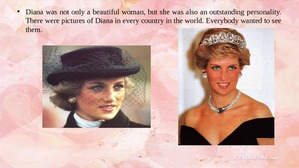 • Diana was not only a beautiful woman, but she was also an outstanding personality. There were pictures of Diana in every country in the world. Everybody wanted to see them. 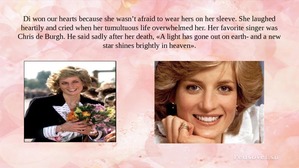 Di won our hearts because she wasn’t afraid to wear hers on her sleeve. She laughed heartily and cried when her tumultuous life overwhelmed her. Her favorite singer was Chris de Burgh. He said sadly after her death, «A light has gone out on earth- and a new star shines brightly in heaven». 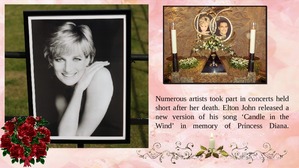 Numerous artists took part in concerts held short after her death. Elton John released a new version of his song ‘Candle in the Wind’ in memory of Princess Diana. 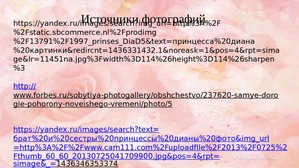 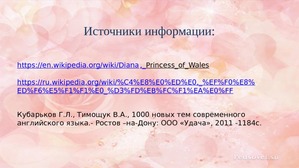 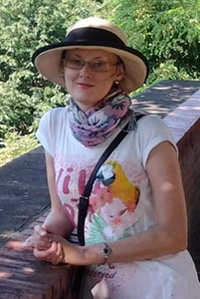