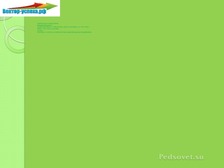 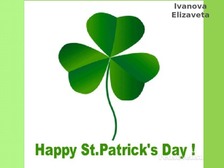 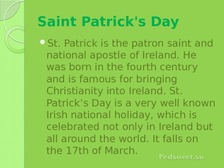 Saint Patrick's Day St. Patrick is the patron saint and national apostle of Ireland. He was born in the fourth century and is famous for bringing Christianity into Ireland. St. Patrick’s Day is a very well known Irish national holiday, which is celebrated not only in Ireland but all around the world. It falls on the 17th of March. 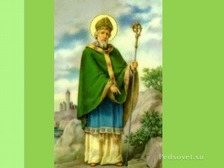 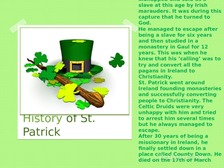 History of St. Patrick kidnapped and sold as a slave at this age by Irish marauders. It was during this capture that he turned to God. He managed to escape after being a slave for six years and then studied in a monastery in Gaul for 12 years. This was when he knew that his ‘calling’ was to try and convert all the pagans in Ireland to Christianity. St. Patrick went around Ireland founding monasteries and successfully converting people to Christianity. The Celtic Druids were very unhappy with him and tried to arrest him several times but he always managed to escape. After 30 years of being a missionary in Ireland, he finally settled down in a place called County Down. He died on the 17th of March 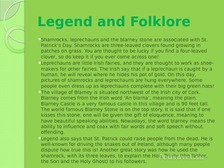 Legend and Folklore Shamrocks, leprechauns and the blarney stone are associated with St. Patrick’s Day. Shamrocks are three-leaved clovers found growing in patches on grass. You are thought to be lucky if you find a four-leaved clover, so do keep it if you ever come across one! Leprechauns are little Irish fairies, and they are thought to work as shoemakers for other fairies. The Irish say that if a leprechaun is caught by a human, he will reveal where he hides his pot of gold. On this day, pictures of shamrocks and leprechauns are hung everywhere. Some people even dress up as leprechauns complete with their big green hats! The village of Blarney is situated northwest of the Irish city of Cork. Blarney comes from the Irish word ‘An blarna’, meaning the plain. Blarney Castle is a very famous castle in this village and is 90 feet tall. The world famous Blarney Stone is on the top story. It is said that if one kisses this stone, one will be given the gift of eloquence, meaning to have beautiful speaking abilities. Nowadays, the word blarney means the ability to influence and coax with fair words and soft speech without offending. Legend also says that St. Patrick could raise people from the dead. He is well-known for driving the snakes out of Ireland, although many people dispute how true this is! Another great story was how he used the shamrock, with its three leaves, to explain the Holy Trinity (the Father, the Son and the Holy Ghost) to his followers. 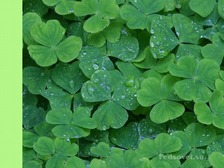 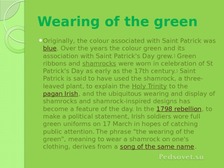 Wearing of the green Originally, the colour associated with Saint Patrick was blue. Over the years the colour green and its association with Saint Patrick's Day grew.] Green ribbons and shamrocks were worn in celebration of St Patrick's Day as early as the 17th century.] Saint Patrick is said to have used the shamrock, a threeleaved plant, to explain the Holy Trinity to the pagan Irish, and the ubiquitous wearing and display of shamrocks and shamrock-inspired designs has become a feature of the day. In the 1798 rebellion, to make a political statement, Irish soldiers wore full green uniforms on 17 March in hopes of catching public attention. The phrase "the wearing of the green", meaning to wear a shamrock on one's clothing, derives from a song of the same name. 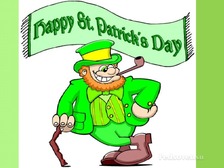 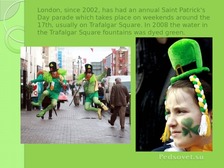 London, since 2002, has had an annual Saint Patrick's Day parade which takes place on weekends around the 17th, usually on Trafalgar Square. In 2008 the water in the Trafalgar Square fountains was dyed green. 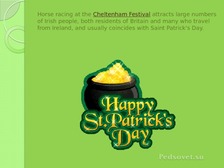 Horse racing at the Cheltenham Festival attracts large numbers of Irish people, both residents of Britain and many who travel from Ireland, and usually coincides with Saint Patrick's Day. 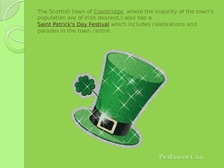 The Scottish town of Coatbridge, where the majority of the town's population are of Irish descent,[] also has a Saint Patrick's Day Festival which includes celebrations and parades in the town centre. 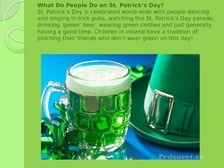 What Do People Do on St. Patrick’s Day? St. Patrick’s Day is celebrated world-wide with people dancing and singing in Irish pubs, watching the St. Patrick’s Day parade, drinking ‘green’ beer, wearing green clothes and just generally having a good time. Children in Ireland have a tradition of pinching their friends who don’t wear green on this day! 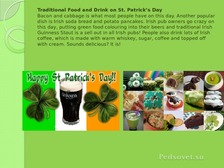 Traditional Food and Drink on St. Patrick’s Day Bacon and cabbage is what most people have on this day. Another popular dish is Irish soda bread and potato pancakes. Irish pub owners go crazy on this day, putting green food colouring into their beers and traditional Irish Guinness Stout is a sell out in all Irish pubs! People also drink lots of Irish coffee, which is made with warm whiskey, sugar, coffee and topped off with cream. Sounds delicious? It is! 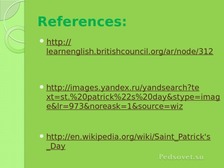 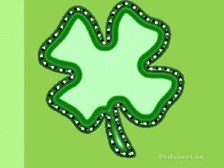