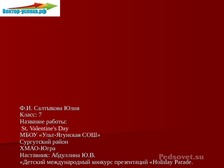 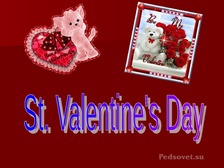 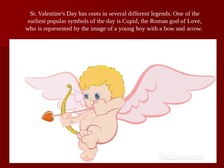 St. Valentine's Day has roots in several different legends. One of the earliest popular symbols of the day is Cupid, the Roman god of Love, who is represented by the image of a young boy with a bow and arrow. 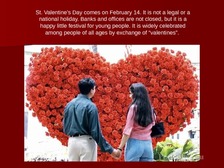 St. Valentine’s Day comes on February 14. It is not a legal or a national holiday. Banks and offices are not closed, but it is a happy little festival for young people. It is widely celebrated among people of all ages by exchange of “valentines”. 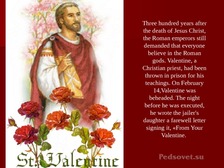 Three hundred years after the death of Jesus Christ, the Roman emperors still demanded that everyone believe in the Roman gods. Valentine, a Christian priest, had been thrown in prison for his teachings. On February 14,Valentine was beheaded. The night before he was executed, he wrote the jailer's daughter a farewell letter signing it, «From Your Valentine. 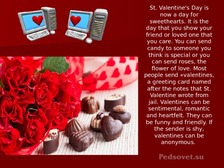 St. Valentine's Day is now a day for sweethearts. It is the day that you show your friend or loved one that you care. You can send candy to someone you think is special or you can send roses, the flower of love. Most people send «valentines, a greeting card named after the notes that St. Valentine wrote from jail. Valentines can be sentimental, romantic and heartfelt. They can be funny and friendly. If the sender is shy, valentines can be anonymous. 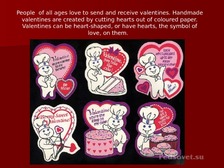 People of all ages love to send and receive valentines. Handmade valentines are created by cutting hearts out of coloured paper. Valentines can be heart-shaped, or have hearts, the symbol of love, on them. 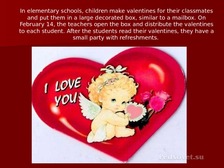 In elementary schools, children make valentines for their classmates and put them in a large decorated box, similar to a mailbox. On February 14, the teachers open the box and distribute the valentines to each student. After the students read their valentines, they have a small party with refreshments. 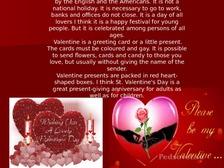 by the English and the Americans. It is not a national holiday. It is necessary to go to work, banks and offices do not close. It is a day of all lovers I think it is a happy festival for young people. But it is celebrated among persons of all ages. Valentine is a greeting card or a little present. The cards must be coloured and gay. It is possible to send flowers, cards and candy to those you love, but usually without giving the name of the sender. Valentine presents are packed in red heartshaped boxes. I think St. Valentine's Day is a great present-giving anniversary for adults as well as for children. 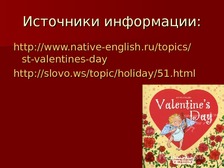